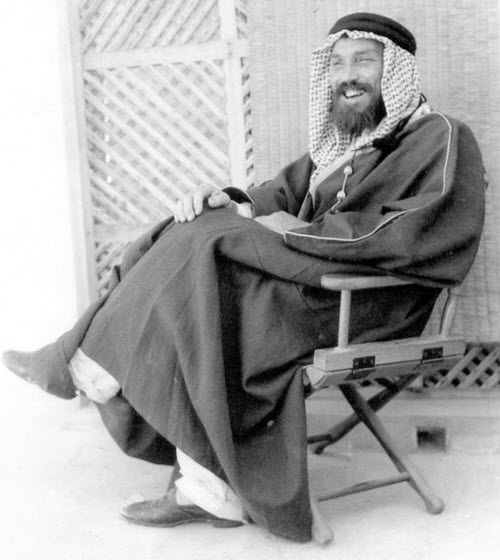 Ever since the beginning of the Saudi Arabian petroleum industry in the 1930s, it has always had strong connections to the United States – and not simply as a trading partner. One example of an individual that personifies this inter-connectedness is Max Steineke (1898-1952), an Oregon-born geologist whose efforts and persistence were instrumental for the first discovery of commercial quantities of oil in Saudi Arabia.

During his time as chief geologist at California-Arabian Standard oil Co (later known as Aramco), Steineke also developed a new structural drilling technique that proved to be instrumental in the discovery of several highly productive oil sites in Saudi Arabia, including the most productive oil field ever found – the illustrious Ghawar where oil extraction commenced in 1948. Steineke´s pioneering technique involved the drilling of shallow holes in order to explore and map the underlying rock formations.

Max Steineke was born in Brookings, Oregon in March 1898.

He grew up on a homestead, where he was one of nine children to German immigrants.

When he was 12 years old, he left home to live in Crescent City, California, where he found a job at a lumber mill. He boarded with a school teacher who encouraged him to pursue further education, and in 1917 Steineke entered Standford University. At that time, there were no mandatory entrance examinations at Standford.

Steineke graduated from Standford in 1921 with an AB degree in geology.

After graduating, he explored for oil in various parts of the world: California, Alaska, Canada, Colombia, and New Zealand, and eventually also in Saudi Arabia.

Looking for oil in Saudi Arabia

Steineke arrived to Saudi Arabia for the first time in 1934, and he was appointed chief geologist for the California-Arabian Standard Oil Company (CASOC) in 1936. CASOC was a subsidiary of Standard Oil of California, which had received an oil concession from Saudi Arabia in 1933.

At this point, the future of the Saudi Arabian oil industry was still unclear. Geologists believed in the possibility of finding commercial quantities oil, but efforts had not been very positive so far. In 1933, the geological formation called Dammam Dome had been tentatively investigated by Schyler B. Henry and J.W. Hoover.

Throughout 1936, none of the wells drilled into the Damman Dome had reached any commercial quantities of oil. In the very last month of 1936 – at the urging of Steineke – the so called No. 7 “deep test” was started, as Steineke wanted to explore the deeper porous limestone (“Arab Zone”).

In 1937, Steineke embarked on a geological reconnaissance trip across the Saudi Arabian peninsula, taking with him a small party that included several other geologist.

Throughout 1937, the No. 7 testing site at Damman Dome experienced several accidents and costly setbacks, and the SoCal leadership was growing increasingly impatient. In early 1938, they brought Steineke back to the United States, where he managed to convince them to at least wait for the results from No. 7 before cutting their losses and folding the Saudi Arabian oil exploration project.

In March 1938, the drilling at No. 7 reached a depth of 1440 metres – and the well started bringing up commercial quantities of oil! Before March was over, the daily yield exceeded 3 000 barrels.

Dammam turned out to be an incredible source of oil, and by 1940 the Dammam field was producing over 12,000 barrels a day.

During Steineke´s continued exploration of the desert, he found clues that pointed to the possible presence of oil at a site located roughly 50 km from Dammam. Testing commenced, and in November 1940 the first well there began producing close to 10,000 barrels a day. What Steineke and his team had discovered was the now famous Abqaiq field.

One of the local people who worked together with Max Steineke in the search for oil in Saudi Arabia was Khamis Bin Rimthan, a Bedouin and who lived with his tribe in the Al-Dahna desert and had an extensive knowledge of desert navigation. When CASOC had asked Abdullah Bin Jalai, Emir of the Eastern Province, to recommend a desert guide he had sent them Rimthan, who started working for CASOC in 1934 and became vital to their work with locating suitable test sites in the vast desert. In 1974, an oilfield in Saudi Arabia was named after him in recognition of his efforts to get the Saudi Arabian oil industry started.

Max Steineke continued to be the chief geologist of CASOC (and later Aramco) in Saudi Arabia throughout the 1940s. During World War II, CASOC played an important role in providing the Allied with vast quantities of petroleum.

Steineke resigned as Aramco´s chief geologist in 1950, when his health had deteriorated too much from a disease he contracted in 1948.