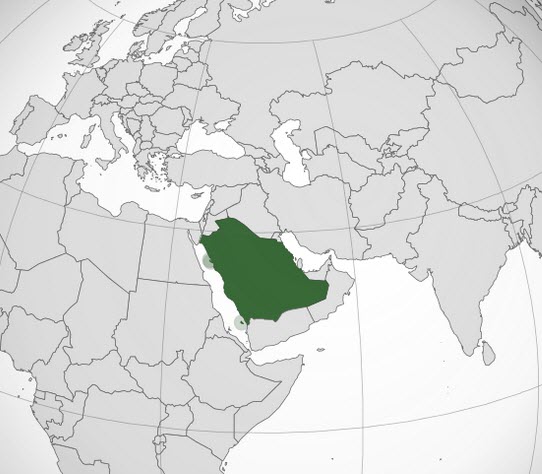 The Kingdom of Saudi Arabia is a Unitary Islamic absolute monarchy spanning the vast majority of the Arabian Peninsula. It is the largest country in the Middle East, and includes notable cities such as Mecca, Medina and Riyadh.

The religion Islam originated on the Arabian Peninsula, and Saudi Arabia is known as “The Land of the Two Holy Mosques” since it is home to both Al-Masjid al-Haram in Mecca and Al-Masjid an-Nabawi in Medina. These are the two holiest places in Islam and important destinations for Muslim pilgrims.

Saudi Arabia is the world´s largest exporter of petroleum and has the worlds second-largest proven petroleum reserves. It is the largest economy in the Middle East and among the top-20 worldwide. Roughly two-thirds of Saudi Arabia´s budget revenues and export earnings come from the oil industry.

The Saudi Arabian economy largely depends on foreign workers, and roughly 80% of those who work in the private sector are not Saudi nationals. “Saudization” attempts are being made by the government, i.e. they are working at getting Saudi workers into the workforce over time. So far, these projects have met with limited success.

Saudi Arabia has been a member of the World Trade Organization (WTO) since 2005 and has taken steps to increase market access for foreign goods as well as foreign direct investments. The Saudi Arabian General Investment Authority has been encouraging foreign direct investments since they year 2000, but several sectors are still protected from foreign investments. Examples of such sectors are telecommunications, insurance and power distribution.

Saudi Arabia is a founding and still active member of the United Nations, the Arab League, OPEC, and the Organisation of Islamic Cooperation.

The Saudi government does not issue statistics on poverty in the kingdom.

Establishment of the second Saudi state: 1824

Establishment of the Emirate of Riyadh: 1902

Adoption of the current constitution of Saudi Arabia: 1992

Several ancient cultures and civilizations have lived on the Arabian Peninsula and the area is rich in traces of prehistoric human activities. The religion Islam emerged on this peninsula in the early 7th century CE, and Muslim Arab dynasties originating from the Arabian Peninsula founded notable caliphates such as the Rashidun, Umayyad, Abbasid, and Fatimid during the second half of the first millennium CE.

The modern-day Kingdom of Saudi Arabia was established in 1932 by King Abdulaziz (Ibn Saud) of the House of Saud. Prior to this unification, the area was divided into the four regions Hejaz, Najd, Al-Ahsa, and ´Asir. King Abdulaziz united them into one kingdom through a series of conquests from 1902 and onwards, including the capture of Riyadh – the ancestral home of the House of Saud.

Since King Abdulaziz, Saudi Arabia has been an absolute monarchy and a hereditary dictatorship. Saudi Arabia is a sovereign Arab Islamic state with Islam a its official religion, Arabic as its official language, and Riyadh as its capital.

Saudi Arabia takes up most of the Arabian Peninsula.

The kingdom is bordered by Jordan and Iraq to the north, Kuwait to the north-east, Qatar, Bahrain and the United Arab Emirates to the east, Oman to south-east, and Yemen to the south.

Saudi Arabia is the only country with coastlines along both the Red Sea and the Persian Gulf.

The Gulf of Aqaba at the northern tip of the Red Sea separates Saudi Arabia from Egypt and Israel. 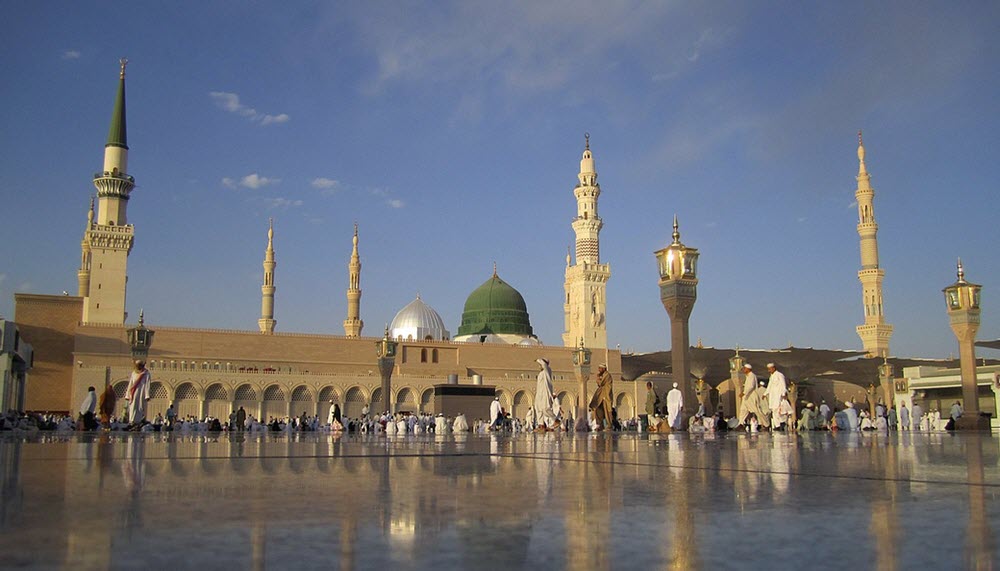 As mentioned above, Saudi Arabia´s economy is chiefly petroleum-based and the workforce is largely comprised of foreign workers. The kingdom has the world´s second-largest proven petroleum reserves, and the fifth-largest proven natural gas reserves. Approximately two-thirds of the kingdom´s budget revenues and export earnings come from the petroleum industry. Saudi Arabia is the world´s second-largest oil producer (behind the USA) and the world´s largest oil exporter.

A majority of the agricultural produce comes from the south-western parts of the kingdom, and the output includes significant amounts of vegetables, fruits (especially dates), and livestock.

In an average year, roughly 2 million Muslim pilgrims visit Saudi Arabia, and this creates a lot of economic activity – although most of the jobs in this field are only seasonal.

Since 1970, Saudi Arabia has used five-year Development Plans. In the 21st century, the plans have included notable efforts to diversify the economy – chiefly through the creation of “economic cities”. One notable example is King Abdullah Economic City, a megaproject along the Red Sea announced in 2005.

As a part of their efforts to diversify the economy, Saudi Arabia has invested in their logistics sector, and ports such as Jeddah Islamic Port and the port of King Abdullah Economic City have grown rapidly in the 21st century. The Arabian Peninsula was historically a part of the Silk Road network, and is today included in the Maritime Silk Road port network that runs from the Chinese shores to and into Europe.

The three major recipients of Saudi exports were China, India, Japan, South Korea, and the United States. The United States imports reached $12.2B, which is fairly low compared to China´s $45.8B.

When it comes to imported goods, the main goods imported to Saudi Arabia in 2019 were cars, broadcasting equipment, refined petroleum, packaged medicaments, and telephones. The main source countries for these imports were China, United Arab Emirates, United States, Germany, and Japan.

Notably, Saudi Arabia was the world´s biggest importer of armoured vehicles in 2019, importing them for a total value of 1.8 billion USD. The country was also the biggest importer of iron reductions, tug boats, sheep and goats, and the spice category nutmeg-mace-cardamom.