Thomas Barger (1909-1986) was a Minnesota-born geologist who started as a surveyor for California-Arabian Standard Oil (CASOC) in Saudi Arabia in 1937 and became CEO of the company in 1961.

During his years as a surveyor, he has participated in the discovery of commercial quantities of oil in Saudi Arabia, including the famous Ghawar field. He was fluent in Arabic and served as an important link between CASOC and the local Arabic speaking population, including the Saudi Arabian government. 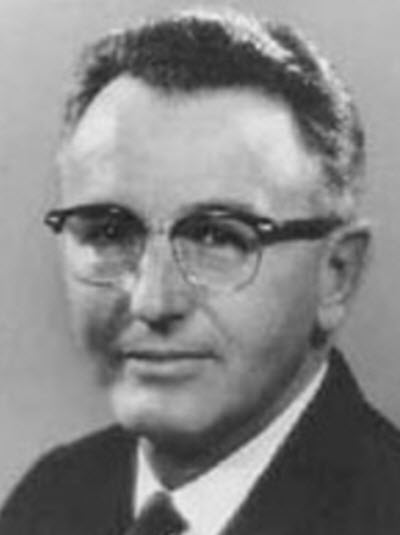 Barger studied at the University of North Dakota´s College of Engineering in Grand Forks, and graduated in 1931 with a degree in mining and metallurgy.

After graduating, he worked as a surveyor and miner in Canada, and in Canada´s Northwest Territories, he took on the roles of engineer, assayer, and assistant manager of a silver and radium mine. He also retained strong ties with his alma mater back in the United States and served as a professor of mining at the University of North Dakota.

Barger accepted a position at the Anaconda Copper Mining Company, but found himself out of a job when the Great Depression caused a sharp decline in the price of copper. In 1937, he therefore took a great leap and moved to Saudi Arabia to work as a surveyor, after interviewing with J.O. Nomland, the chief geologist of the Standard Oil Company of California in San Francisco.

Thomas Barger moved to Saudi Arabia in 1937 to work for the Standard Oil Company of California (SoCal), who at the time were exploring potential oil sites in the Saudi desert through their subsidiary California-Arabian Standard Oil (CASOC).

In Saudi Arabia, he worked as a surveyor and geologist alongside Ernie Berg, under the now famous geologist Max Steineke. The team also included Bedouin desert navigators headed by Khamis bin Rimthan. Together, they discovered huge quantities of oil hidden deep below the desert sand. Among their findings was the famous Ghawar Field.

Thomas Barger learned the Arabic language and became an important connection between the United States-based oil corporation he worked for and the Saudi people, including the Saudi government.

Barger´s career with the corporation lasted for over three decades and included several different roles and positions. Initially a surveyor, he then became the director of Local Government Relations, the company representative to the Saudi government, and the manager of Concession Affairs.

In 1957, Barger was appointed vice president of CASOC, which at that point had already been renamed Arabian American Oil Co (Aramco). Two years later, he succeeded Norman Hardy as president of Aramco, and in 1961, Barger became Chief Executive Officer of the company.

Barger stayed with Aramco until he retired from the company in 1969.

Thomas Barger married Kathleen Elizabeth Ray on 18 November, 1937, and left for Saudi Arabia soon thereafter. The couple would spend the first three years of their marriage apart, as he was living in Saudi Arabia exploring potential oil sites. Eventually, she also moved to Saudi Arabia and they lived together in Dhahran. They had six children.